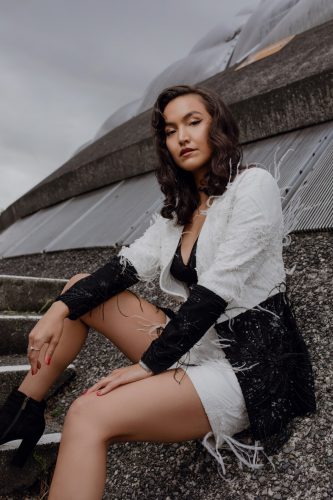 Moonchildren Films and Kadence Productions partnered to bring the story of Tlingit artist Kiri Geen to the big screen and announce the directorial debut of Grace Dove with their film ‘Kiri and The Girl’ landing premieres at VIFF (Vancouver) and SDIFF (San Diego) this October, shining a light on Geen’s story of Indigenous reclamation.

The short film was made with a grant from The Canada Council for the Arts and follows a young Kiri as she reconnects to her heritage after the loss of her mother. The fairy tale based on Geen’s experiences is produced by Geen herself, her partner Christopher Logan in Moonchildren Films (Vancouver) and Ken Shapkin of Kadence Productions (Victoria). The film team includes Cinematographer Stirling Bancroft CSC (Monkey Beach), with Production Designer Margot Ready (The Magicians, Kung-Fu), Costume Designer Carmen Thompson (Monkey Beach, Red Snow), and Casting Director Natalye Vivian (Thoughts and Prayers) on board as Associate Producers.

“Reconnection is a powerful thing. Sharing my journey will hopefully help others find their own way to heal.”
~Kiri Geen, Producer

“This film has the potential to show young Indigenous children that while they may feel that their link has been fatally severed, the spirits of their ancestors never left the land, and if we seek them, we will find ourselves restored.”
~Grace Dove, director.

The all-Indigenous cast is led by Tahmoh Penikett (Battlestar Galactica, 2 Hearts), Barbara Patrick (Five Star Christmas) and introduces young actress Isla Grant. ‘Kiri and The Girl’ filmed with the cooperation of the cities of Burnaby, Coquitlam and Maple Ridge of British Columbia.

The filmmakers gratefully acknowledge filming on the unceded territories of the Katzie, Musqueam, Squamish, Stó:lō and QayQayt Nations.