Houdini Swap is a non-custodial swap platform that allows users to quickly and easily anonymize blockchain transactions. Utilizing Monero as a “tunnel” between exchanges, Houdini Swap enables users to break all on-chain links between sending and receiving wallets. Houdini Swap is a Dream Labs incubated project.

Houdini Swap’s mission is to bridge the disconnect between the public nature of blockchains with the individual’s inherent right to both privacy and personal financial security. There is sound logic for why digital fiat systems such as bank accounts and credit card transactions are not public to all onlookers; privacy is a core element of security. The public nature of blockchains leaves people vulnerable to risks ranging from phishing scams to violence.

Houdini Swap users can expect the team to continue to improve the core anonymization services and build complementary features such as, but not limited to a fiat on/off ramp, non-anonymous swaps, and an API for white labeling.

Since the platform’s inception in July 2022, Houdini Swap has: 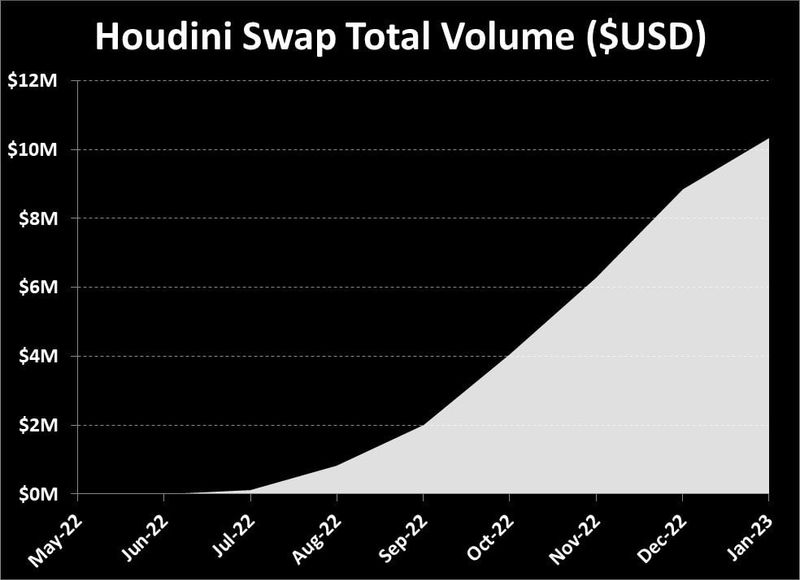 With the upcoming launch of the Houdini Swap loyalty program enabled by $POOF token, token holders will have the ability to earn swap fee rebates, affiliate rewards, prizes, and other incentives.

To enter into the Houdini Swap loyalty program, swap users must stake their $POOF tokens for varying amounts of time. The longer the staking period and the more that is staked, the larger the swap fee rebates for the user to claim.